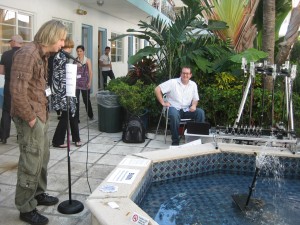 Street Meetings comprises interactions between humans, machines, and the environment. The rhythmic patterns played by the robotic instruments interact with the level of sound coming from the environment. As the ambient sound level rises, the sparse and seemingly chaotic rhythmic patterns begin to coalesce into a polyrhythmic texture. All the while the robots are constantly seeking out interactions with passing humans. If you speak to the robots, they will stop their performance and listen. When you have finished speaking they will respond. If you sing to the robots they will sing along and match the pitch that you are singing.