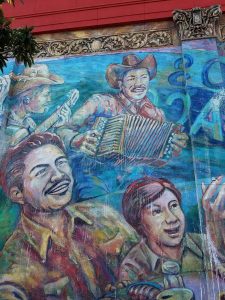 Boyle Heights (Rhythmanalysis II) for marimba and fixed media electronics explores the soundscape, history, and cultural identity of Los Angeles’ Boyle Heights neighborhood. Boyle Heights is a predominantly Mexican-American neighborhood in East L.A. known for its central role in Chicano art and culture. In the first half of the twentieth century, Boyle Heights was home to large Jewish and Japanese-American communities. After World War II, the internment of Japanese-American residents, redlining, and freeway construction underpinned a demographic shift. By the 1960s Boyle Heights became the neighborhood that it is today, which is currently engaged in a battle to retain its Mexican-American cultural identity in the face of a wave of gentrification that is sweeping over East L.A. 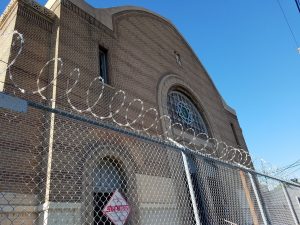 Boyle Heights unfolds in three sections, each bookended by a sonification of traffic patterns. The first section evokes Boyle Heights’ Jewish and Japanese cultural history through a marimba part inspired by the Jewish worker’s song “Di Shvue” combined with the Hirajōshi Japanese scale. This is set against the backdrop of an electronic texture comprised of recordings of radios processed to sound like they are from the early days of wireless broadcast. The second section explores Boyle Heights’ current soundscape, which is shaped by its Mexican-American cultural identity. Sounds unique to this neighborhood include mariachi musicians for hire who gather at Mariachi Plaza and the sound of storefront radios on Cesar E. Chavez Avenue. The third section contemplates the future of Boyle Heights. A time-stretched siren and the sound of helicopters point to the community’s fight against gentrification, while the minimalistic, repetitive rhythms represent the unrelenting pace of development in East L.A. 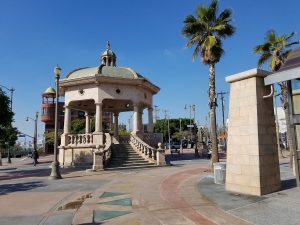 Boyle Heights (Rhythmanalysis II) is the second piece in the composer’s Rhythmanalysis series that explores urban soundscapes. Henri Lefebvre developed the concept of Rhythmanalysis to analyze how the periodic sounds of urban spaces relate to the experience of a place. The electronic component of Boyle Heights is based on audio recordings taken in Boyle Heights, which are used in both raw and processed form. The most prevalent sound in these recordings, passing vehicular traffic, is analyzed using sonographic analysis and music information retrieval (MIR) techniques to produce timing, amplitude, and frequency information. This data is mapped to rhythm and pitch in the marimba part, producing a sonification of the ebb and flow of vehicular traffic that creates a “rhythm” of the neighborhood. This piece was written for percussionist Mike Truesdell and is based on the work of L.A. Listens (lalistens.org), a collective focused on urban sound co-founded by the composer.